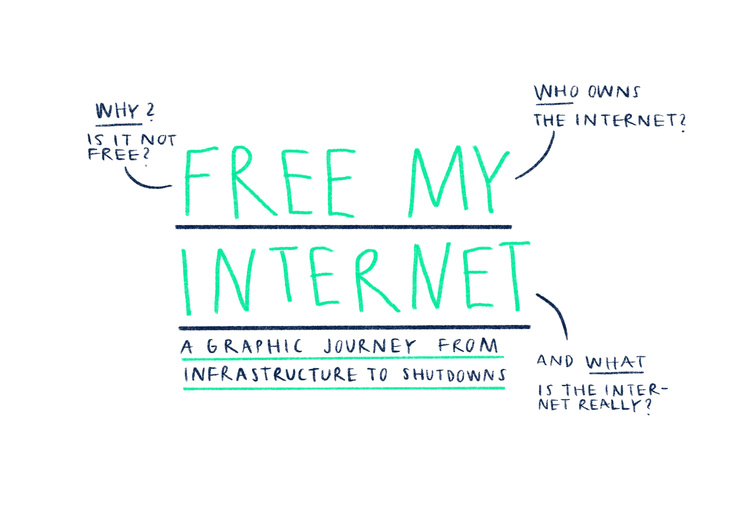 With growing attempts to censor and limit access to the Internet, the Swiss Digital Initiative is happy to feature a guest post about an overlooked topic: the digital infrastructures behind our virtual world. Based on the work of the Telecommunications Ownership and Control (TOSCO) project, funded by SNIS Geneva, & the FreeMyInternet Project funded by SNF AGORA, with Dr. Veronique Wavre, Dr. Lisa Garbe (@LaserGabi) & Professor Tina Freyburg (@TFreyburg) from the University of St. Gallen, the following post raises awareness about the hidden aspects of the Internet and introduces an educational resource for all users. 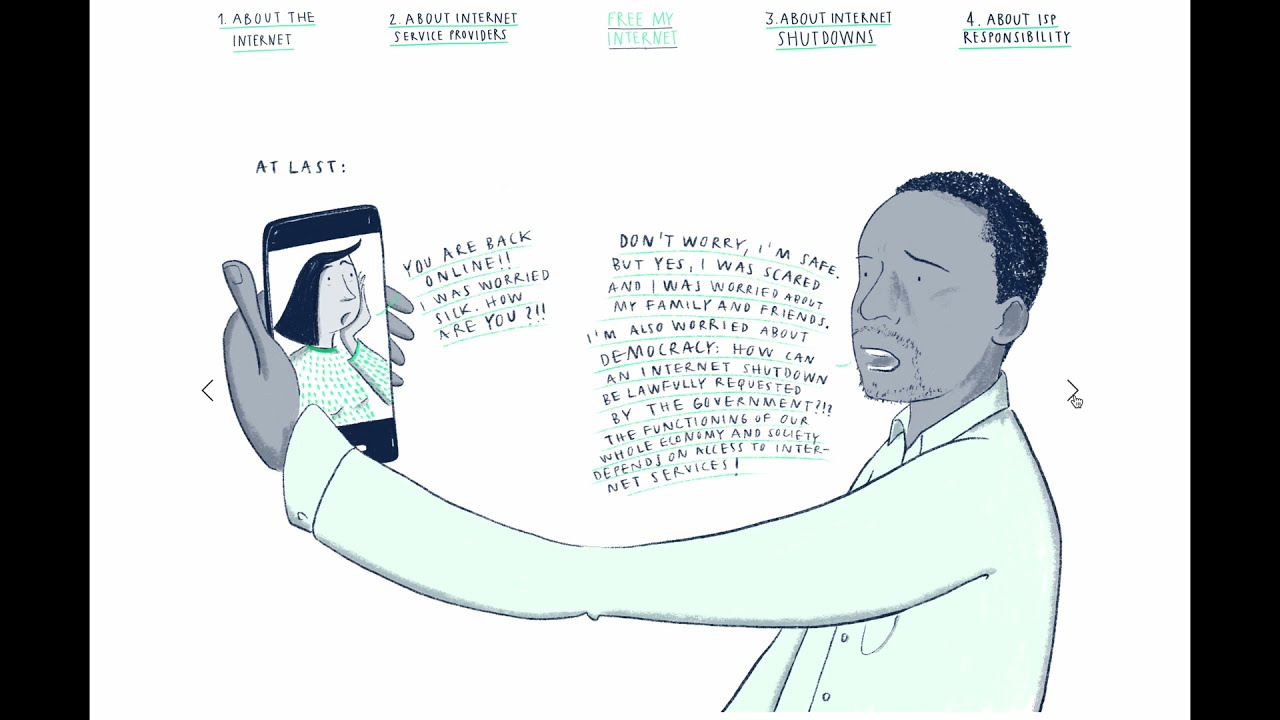 Increasingly, states all over the world use of internet shutdowns as a repression tool, especially in times of political contestation. Back in 2011, the Egyptian uprising showed how the access to the internet can be restricted arbitrarily upon a decision by the ruling elite. In Egypt, the internet was almost completely blocked for several days. Yet, before the shutdown took place, the Egyptian internet access proved resilient and survived in one way or another for up to seven days (Wilson 2015).

Motivated by the idea that governments cannot simply shut down the internet as they wish, Lisa Garbe, Tina Freyburg and myself, Veronique Wavre, decided to research the inner workings of the internet, that is, its physical infrastructure, ownership and its implications for the provision and suspension of internet services. The telecommunication ownership and control (TOSCO) project was born.

We focused our attention on the role of internet service providers (ISPs). Those companies are gateways through which data flow in and out of the territories they operate in (DeNardis 2014:11). Internet shutdowns, in fact, represent the most direct form of control over internet access, where ISPs are requested to comply with a government request to manipulate their services (Aceto & Pescapè 2015, Freyburg & Garbe 2018).

To research the role of ISPs in implementing internet shutdowns, we decided to focus on Africa, a continent with an immense political and economic diversity. We gathered data for 50 mainland countries & Madagascar over 19 years, from 2000 to 2019, enquiring which telecommunication companies had provided access to the internet during that time period in each of the countries. We furthermore gathered information about who these companies belong to (Freyburg, Garbe & Wavre). The underlying argument being that the owners of ISPs differ and so may their capacity to resist or adopt state requests to shut down the internet in times of political contestation. 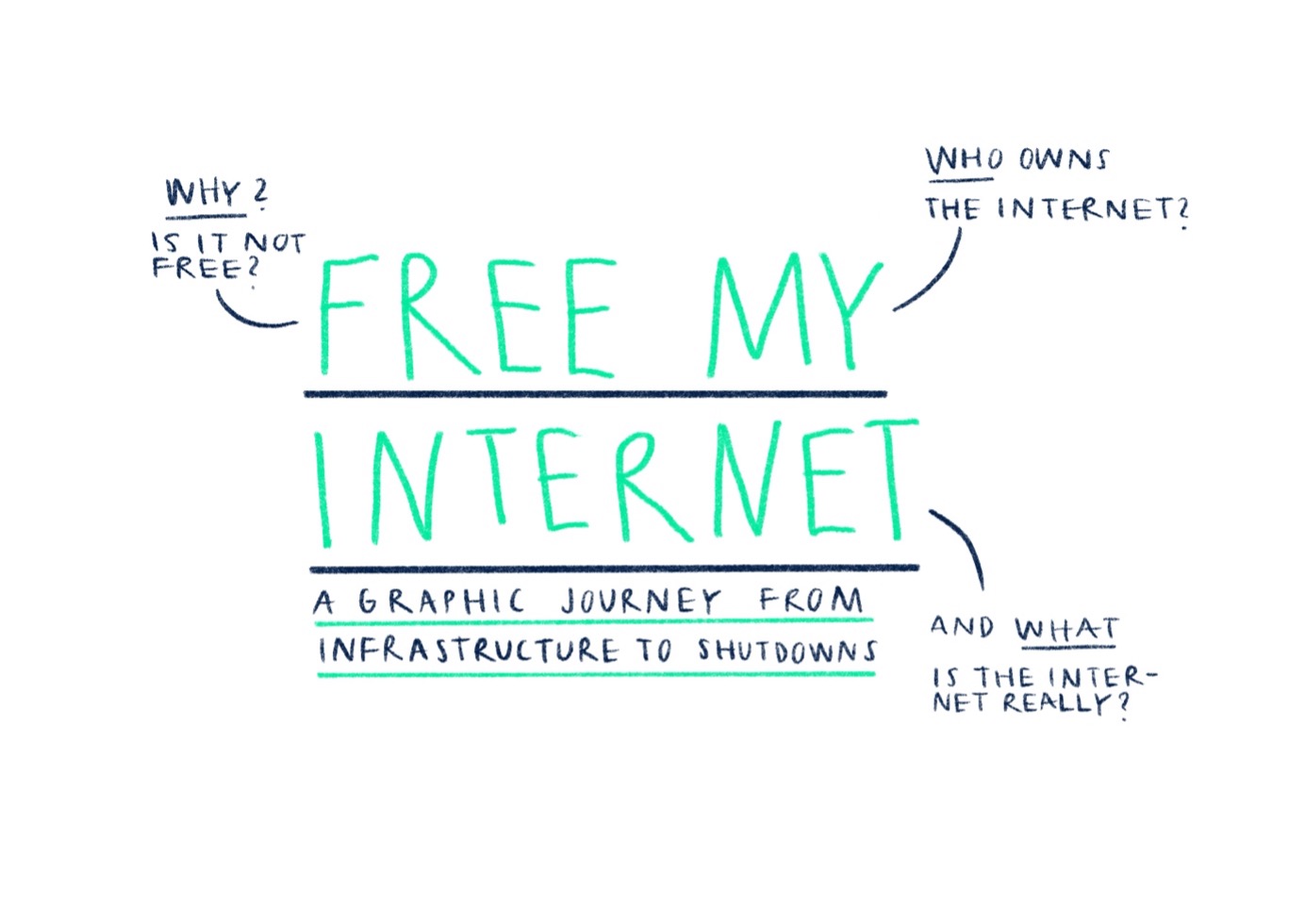 In the Summer of 2018, our TOSCO team spent several weeks in Uganda, interviewing key experts in the field, such as activists, lawyers, ISPs and state representatives. We gathered evidence that ISPs are aware of their role in implementing internet shutdowns, but tend to accept state requests, to avoid political and economic repercussions. Supported by video journalist Noémie Guignard, we released a short movie ‘Citizens Offline’, where we use the example of the internet shutdown that took place during the 2016 Ugandan elections to illustrate our work. The video follows our research and gives a voice to Ugandan activists, such as Daniel Bill Opio. 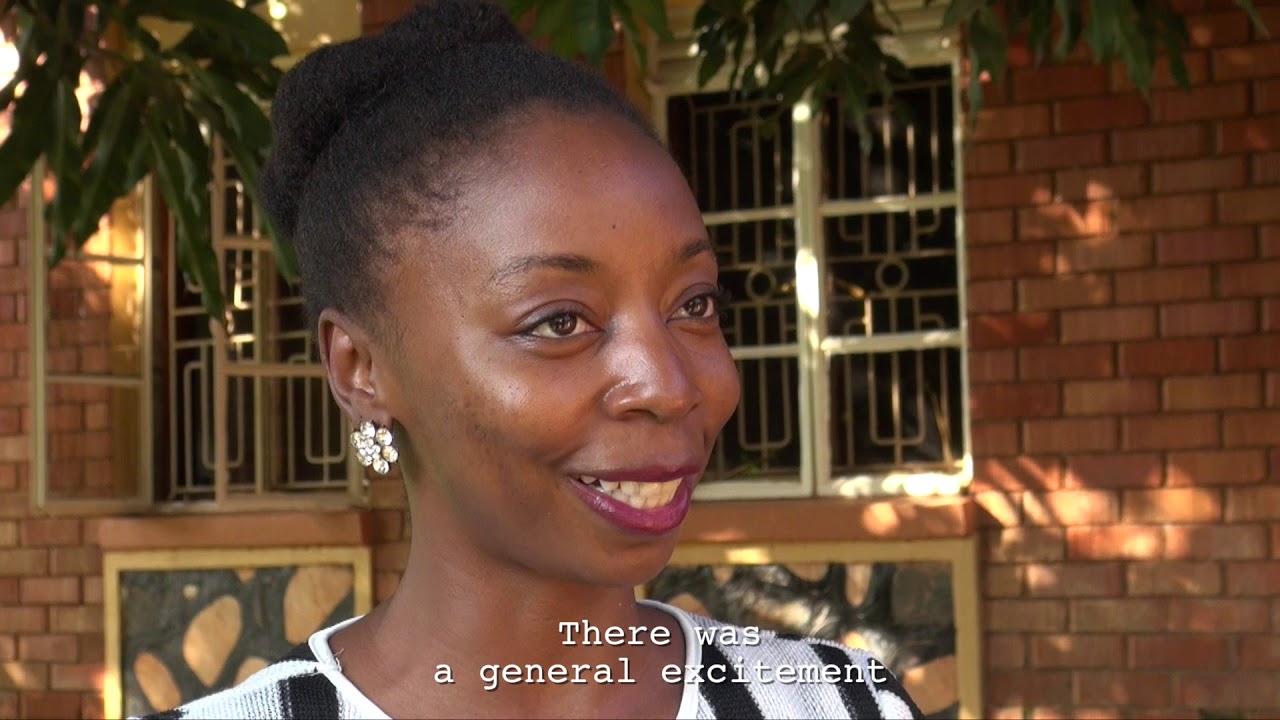 After several years working with the political implications of internet infrastructure, a new aspect of our research grew in importance: the fact that the general public has only little understanding about the internet’s infrastructure and its implications. We decided to work in collaboration with illustrator Pia Valaer and created a mini-series of graphic short stories. Each one addresses a pivotal aspect of internet infrastructure and internet shutdowns. We use these stories as an entry point to reach the general public, with a focus on young people as next-generation users. The FreeMyInternet website was published in 2021 and we have used it since then to teach in schools and universities in Switzerland and Germany (Wavre, Garbe, Freyburg & Valaer).

Meet Ada, our main protagonist. Ada, is named in honor of Ada Byron, Lady Lovelace (1815-1852), the first recognized female programmer. She drives us through the understanding of telecommunications ownership & Internet shutdown.

This story demonstrates that those parts of internet infrastructure run by ISPs are crucial to providing internet connectivity to the larger population. The internet is made of multiple layers, serving different functions (for example, content, application, logical). We focus on infrastructural layer, that is cables, wires, phones, computers, and routers, that are needed to establish and maintain connection. ISPs enable the ‘last-mile’ connections to end-users. In other words, with ISPs exists the industry-wide capacity to grant and restrict access to the internet.

This story describes the African telecommunications sector and reflects on the implications for individual access to internet services. Africa is the least connected region in the world. The majority of web traffic originates from mobile devices, only around 15 percent of the households have fixed broadband access. Traditionally, as in most parts of the world, states used to own telecommunications companies. Nowadays, ISPs are owned by a variety of different shareholders. Among the diversity of owners, we consider owner types, such as state-owned, family-owned or privately-owned, but also in terms of origins (foreign versus domestic ownership). 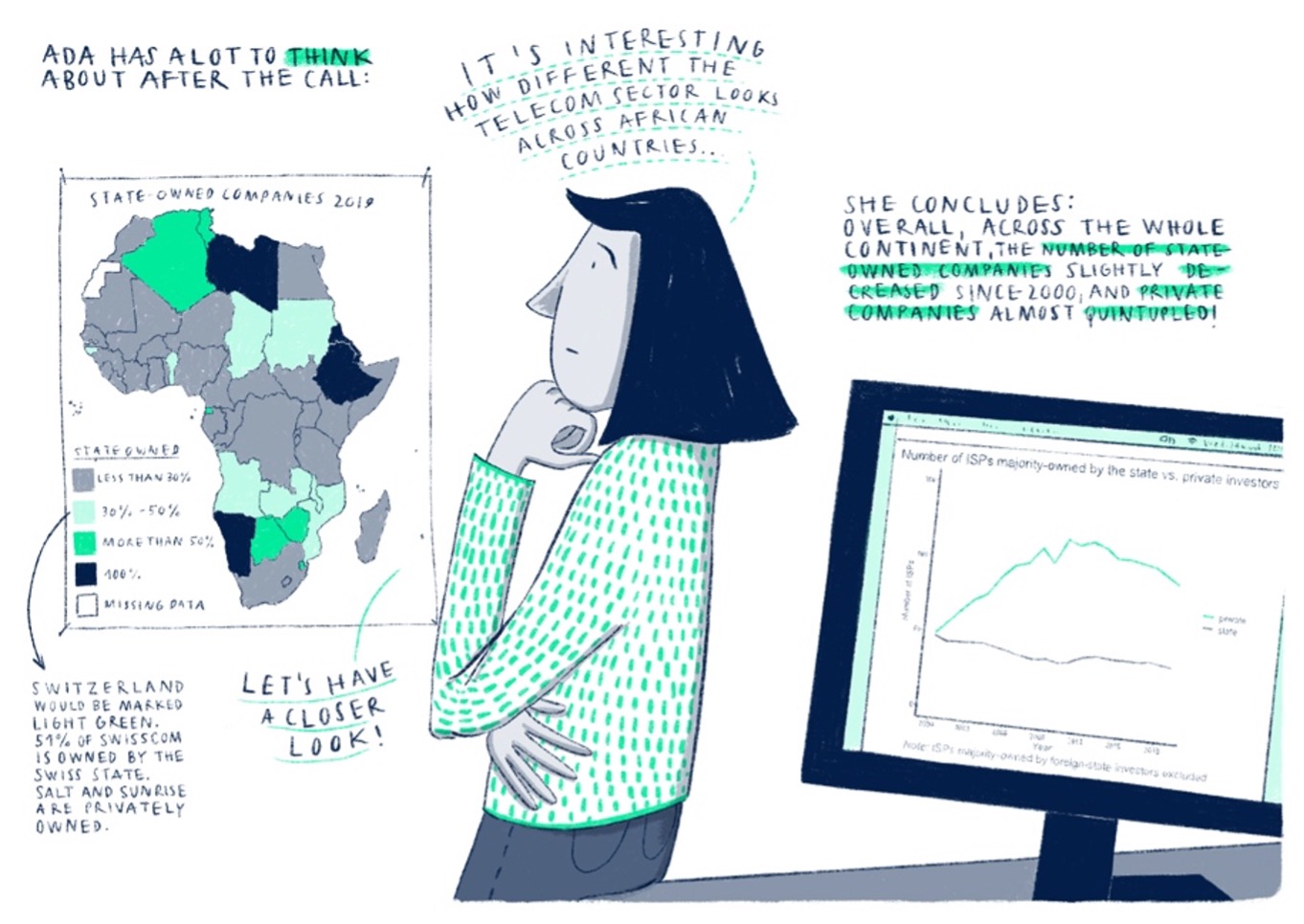 This story problematizes the responsibility of ISPs in politically motivated disruptions of access to internet services. ISPs, when faced with a government request to block internet access, can be confronted with conflicting local and international laws. This is especially the case, if these companies are held by foreign owners, whose headquarters are based abroad, for example in established democracies. In response to increasing pressure from civil society, many firms actively promote higher social corporate responsibility standards. In the telecom sector, a group of multinational internet companies, including Orange and Vodafone, founded the **Global Network Initiative **that develops guidelines to respect freedom of expression and privacy 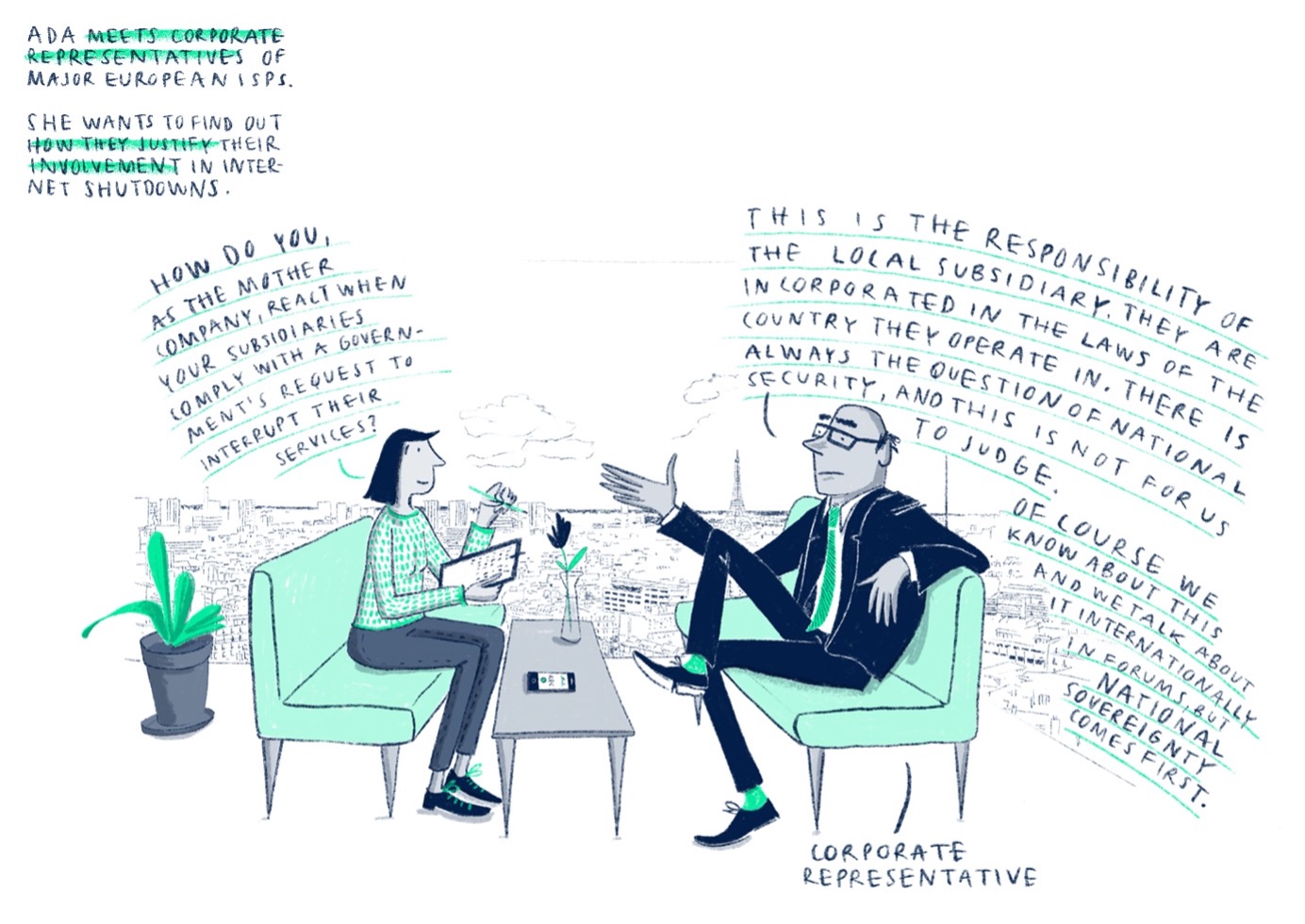 Wilson, Steven (2015) How to control the Internet: Comparative political implications of the Internet's engineering. First Monday 20(2).