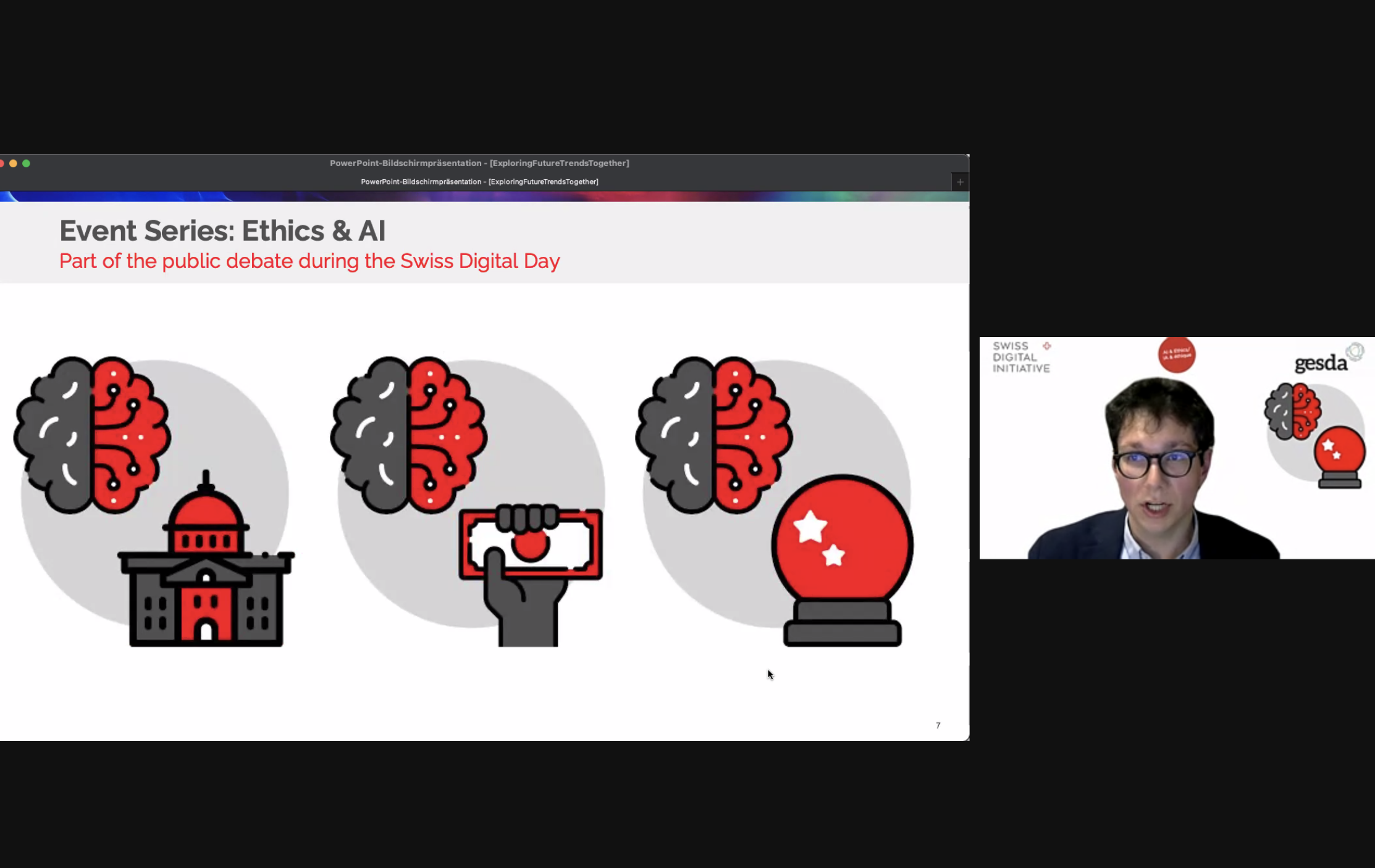 For the conclusion of our Ethics & AI event series for the Swiss Digital Days, the Swiss Digital Initiative and GESDA welcomed three experts for a look into the future. The technological trends over the next 5, 10 and more years as well as their social consequences and learnings for governance were discussed

Science and technology shape the way our society evolves, how we perceive ourselves as human beings and our relationship to the environment. Looking into the future is therefore not only interesting for authors of science-fiction but highly relevant to inform public debates and diplomatic discussions today. This is why GESDA engages in science anticipation to explore how science and technology could evolve in the coming 25 years, what they mean for humanity, society and the planet and which actions are required by all actors of the  international community to foster inclusive development and well-being. The freely available 2021 GESDA Science Breakthrough Radar provided the inputs to the presentation and the open discussion with the audience that followed.

Public sentiment towards future digital technologies not as negative as expected, but significant differences according to geographical and generational backgrounds

The views of citizens directly affected by the deployment of advanced technologies such as Artificial Intelligence are not sufficiently taken into account in policy discussions. Valentine von Toggenburg-Bulliard from the WEF Global Shapers Community presented the in-depth analysis of citizen sentiment with respect to the quantum revolution and advanced artificial intelligence as part of the Pulse of Society study within the GESDA Science Breakthrough Radar. The sentiments were extracted by a machine-learning algorithm based on more than 11 million social media posts (the DeepView tool). The analysis shows a net positive sentiment regarding the prospect of new technologies but also vast differences depending on various factors, from education to gender and geography. Europeans are e.g. more sceptical about the benefits of AI than North Americans or Africans.

The differences shown and the insights gathered from the analysis, which sometimes deviate significantly from our personal perceptions, show the necessity of making citizens' voices heard and to implement actions to bridge potential divides, e.g. the knowledge and perception gap between scientists in their labs and the concerns of ordinary citizens. With the study providing valuable data points as a snapshot, the question remains, how can the inclusion of citizens into the deployment of technology, its development and governance discussions happen in a sustainable manner?

Significant and impactful breakthroughs in AI close ahead

The second input was made by Prof. Rüdiger Urbanke from EPFL. He contributes to GESDA’s work on science anticipation in the area of advanced artificial intelligence, describing what is cooking in the labs worldwide and which important breakthroughs at 5, 10 and 25 years one might expect. While several potential future advances make headlines, he predicts that we will already see significant changes in the near future, simply through the increasing processing power of computers, ever pervasive digitalisation and the resulting quantity of data available.

The next milestone is the development of AI systems that are able to understand real-world context, can incorporate common-sense reasoning,  and can efficiently transfer gained knowledge from one task to another, in order to tackle what is called the long-tail of every-day problems. If we want to deploy AI systems broadly, it will also be important to address issues of fairness, how to deal with potential bias in the data ethics issues. In the long run, much more radial development might occur. E.g., we might see enhanced brain-machine interfaces or even augmented humans.

With technology advancing at an ever increasing pace, a big challenge is how to close the ever-widening knowledge gap between scientists and policymakers. While policy-makers look for the solutions of today, they often lack the capacity to understand the evolution of science and technology and hence find it hard to develop the necessary agile governance frameworks.

The third perspective on AI and new technologies comes from Dr. Ulrike Till from WIPO, where she heads the Intellectual Property and Frontier Technology Division. According to her, we are living in an era of unprecedented connectivity and this has an impact on intellectual property. Digitalization and the increase in data people are generating are boosting innovation. But digitalization also raises complex questions from an intellectual property perspective, e.g. what about inventions and innovations made by new technologies such as music or other artworks created by AI? The WIPO Conversation is the global leading forum for these discussions. The Conversation is open to everyone and WIPO is organizing an upcoming session in 2022. WIPO also held an exhibition to explore these questions.

i) there is no single regulatory measure for AI or for other digital technologies. The issues raised are so complex and the technologies impact so many different aspects that any governance framework needs to be aware of all the interrelated aspects;

ii) too often in current discussions we are focussing on Artificial Intelligence. But what is really at the heart of AI and other technologies is data. For data there are countless governance frameworks in place but those need to be simplified;

iii) there seems to be a new “space race” as nations compete for frontier technologies which can make discussions on their governance and for open innovation policies difficult.

The discussion and the questions from the audience not only showed the interest in understanding the impact of technological developments on the international community. It has also become clear once again that this discussion benefits from including different perspectives. This is particularly the case when talking about ethics. In contrast to other aspects, there aren’t simple checklists that can be hardcoded. To truly engage with ethics means accepting complexity and not opting for simple “solutions”.

Our three events took different perspectives at a complex field: ethics and artificial intelligence. Each event showed that it is high time for digital ethics to go mainstream. The social, economical and political consequences of digital technologies are already apparent today. A broad debate from all stakeholders is needed to ensure that technological developments are benefitting societies. We are looking forward to continuing this discussion.